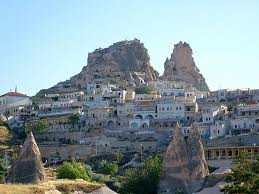 Uchisar is situated at the highest point in Cappadocia, on the Nevsehir-Goreme road, just 5 km from Goreme. The top of the Uchisar Castle, provides a magnificent panorama of the surrounding area with Mount Erciyes in the distance.

Many rooms hollowed out into the rock are connected to each other with stairs, tunnels and passages. At the entrances of the rooms, there are millstone doors, just like the ones in the underground settlements, used to control access to these places. Due to the erosion in places of this multi-leveled castle, it is unfortunately not possible to reach all the rooms. Most of the rooms, located on the north side of the castle are in use as pigeon houses (dovecuts) today. Farmers used these cave pigeon houses to collect the droppings of pigeons which is an excellent natural fertilizer for the orchards and vineyards.

There are also many other pigeon houses in Pigeon Valley (Guvercinlik Vadisi in Turkish) which connects Uchisar to Goreme. Most of these cave dwellings have been painted white to attract the birds and their valuable droppings.

The fairy chimneys to the west, east and north of Uchisar were hollowed out and used as graves during the Roman period. Inside these rock cut tombs, the entrances which generally face west, are klines or stone slabs on which the bodies were laid.

Many rock cut churches have been discovered not only on the outskirts of the castle but also inside it. The reason for this may be that Goreme, having numerous churches and monasteries, is very close to Uchisar.

The simple Byzantine graves on top of the castle are not very interesting as they have been eroded and ransacked. It is said that in towns with citadels, e.g. Uchisar, Ortahisar and Urgup (Bashisar), long defense tunnels reached far into the surrounding areas. However, since the tunnels have collapsed in places, this theory cannot be confirmed, but is a popular myth as to the great distances they cover.

There are minibuses between Goreme and Uchisar which depart at every half an hour on weekdays and every hour on weekend. You can also walk through the Pigeon Valley which offers a fascinating landscape. A hike from Goreme to Uchisar through Pigeon Valley takes about two hours.