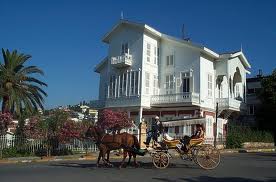 Prince’s Islands: Also known as İstanbul Islands, there are eight within one hour from the city, in the Marmara Sea. Boats ply the islands from Sirkeci, Kabataş and Bostancı, with more services during the summer. These islands, on which monasteries were established during the Byzantine period, was a popular summer retreat for palace officials. It is still a popular escape from the city, with wealthier owning summer houses.

Princes Island will be visited by our princess island tour
Büyükada The largest and most popular one in İstanbul is Büyükada (the Great Island). Large wooden mansions still remain from the 19th century when wealthy Greek and Armenian bankers built them as a holiday villas. The island has always been a place predominantly inhabited by minorities.

Buyukada has long had a history of people coming here in exile or retreat; its most famous guest being Leon Trotsky, who stayed for four years writing ‘The History of the Russian Revolution’. The monastery of St George also played host to the granddaughter of Empress Irene, and the royal princess Zoe, in 1012.

The island consists of two hills, both surmounted by monasteries, with a valley between. Motor vehicles are banned, so getting around the island can be done by graceful horse and carriage, leaving from the main square off Isa Celebi Sokak. Bicycles can also be hired.

The southern hill, Yule Tepe, is the quieter of the two and also home of St George’s Monastery. It consists of a series of chapels on three levels, the site of which is a building dating back to the 12th century. In Byzantine times it was used as an asylum, with iron rings on the church floors used to restrain patients. On the northern hill is the monastery İsa Tepe, a 19th century house.

The entire island is lively and colourful, with many restaurants, hotels, tea houses and shops. There are very big well-kept houses, trim gardens, and pine groves, as well as plenty of beach and picnic areas.

Burgazada It is a smaller and less infrastructured for tourists.The famous Turkish novelist, Sait Faik Abasıyanık lived there, and his house has been turned into a museum dedicated to his work, and retains a remarkable tranquil and hallowed atmosphere.

Heybeliada ‘Island of the Saddlebag’, because of its shape, is loved for its natural beauty and beaches. It also has a highly prestigious and fashionable watersports club in the northwest of the island. One of its best-known landmarks is the Greek Orthodox School of Theology, with an important collection of Byzantine manuscripts. The school sits loftily on the northern hill, but permission is needed to enter, from the Greek Orthodox Patriarchate in Fener. The Deniz Harp Okulu, the Naval High School, is on the east side of the waterfront near the jetty, which was originally the Naval War Academy set up in 1852, then a high school since 1985. Walking and cycling are popular here, plus isolated beaches as well as the public Yöruk Beach, set in a magnificent bay.

There are plenty of good local restaurants and tea houses, especially along Ayyıldız Caddesi, and the atmosphere is one of a close community.