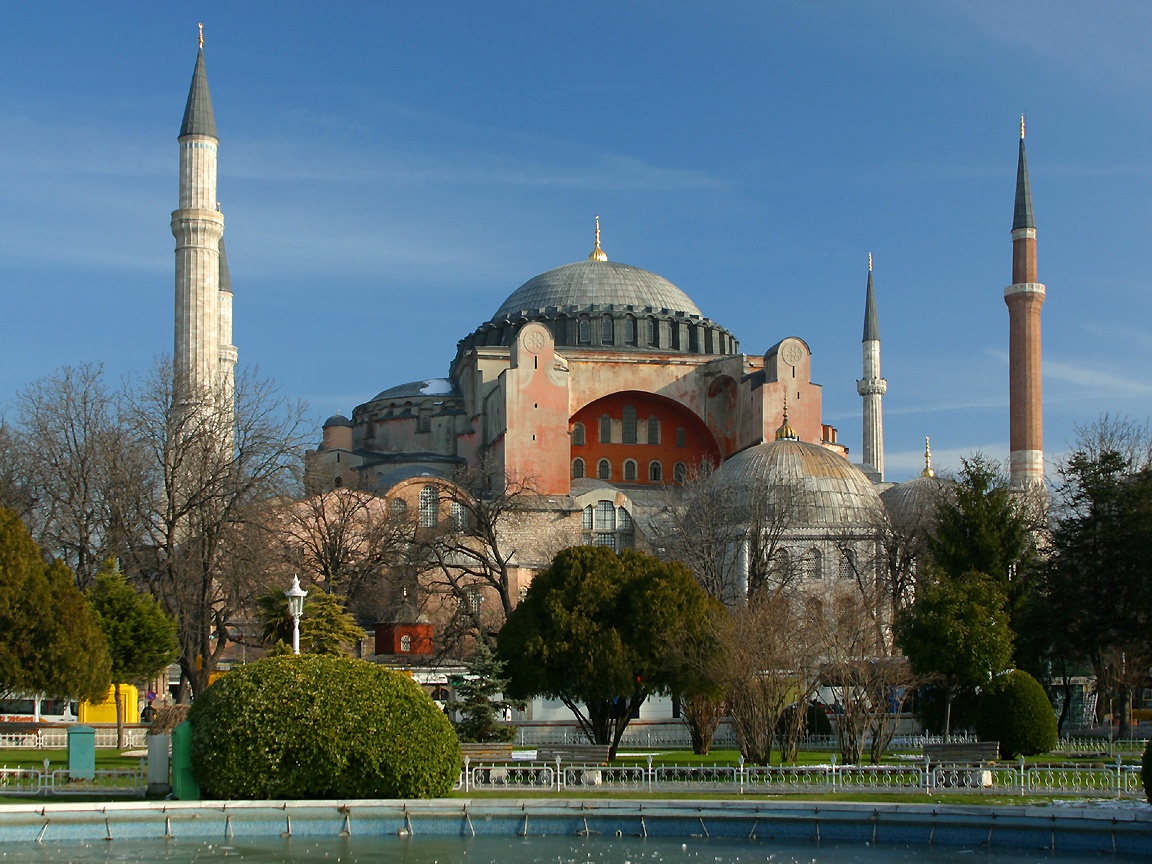 The magnificent Hagia Sophia was originally built by Justinian and used as a church for 916 years. It then became a mosque for 481 years and Ataturk declared it a museum in 1935. Considered the first and last unique application in terms of its architecture, magnificence and functionality, it has been the inspiration for Ottoman mosques for countless centuries. The incredible frescoes and mosaics in the upper gallery, despite being damaged, are among the most visited sites in the city. The Hagia Sophia is the number one must-see.

Hagia Sophia is a great architectural beauty and an important monument both for Byzantine and for Ottoman Empires. Once a church, later a mosque, and now a museum at the Turkish Republic, Hagia Sophia has always been the precious of its time.

The mystical city Istanbul hosted many civilizations since centuries, of which Byzantium and Ottoman Empires were both the most famous ones. The city today carries the characteristics of these two different cultures and surely Hagia Sophia is a perfect synthesis where one can observe both Ottoman and Byzantium effects under one great dome

Known as the “Great Church” or “Magna Ecclesia” in Latin, the first church was built at the same location where there had been a pagan temple before. It was Constantius II who inaugurated Hagia Sophia on 15 February 360. From the chronicles of Socrates of Constantinople, we know that the church was built by the orders of Constantine the Great.

This first church was a wooden-roofed basilica with a nave flanked by two or four aisles, each carrying a gallery storey. It was preceded by an atrium. This church was largely burned down in 404 during riots since patriarch John Chrysostom was sent into exile by the Emperor Arcadius

After the first church’s being destroyed, Theodosius II ordered it to be repaired and inaugurated the second church on 10 October 405.
Today we still don’t know whether the original fourth century plans remained unchanged or not. But still it consisted of standard architectural elements of the Byzantine period: an atrium, probably a narthex and a basilica with galleries.
The second church was completely destroyed during the tumult of the Nika Revolt in 13-14 January 532.

Today, some marble blocks from this second church are represented at the courtyard of the third church/ the museum.

Only a short time after the destruction of the second church, Justinian the Great suppressed the riots, and set about rebuilding what was damaged and destroyed.
He commissioned two men, Anthemius of Tralles and the Elder Isidore of Miletus to build a third church at the same location which would be greater than its previous predecessors. Anthemius and Isidore were not referred as architects, but they were called “mechanikoi” which means the masters of the science of the mechanics. Indeed, Anthemius was a mathematician and physicist, and Isidore was a professor of geometry and mechanics. None of them is known to have any building experience before Hagia Sophia. However, they created one of the most significant monuments on earth.

The construction started only a short while after the end of the Nika Revolt. Many materials had been brought from all over the empire, including yellow stone from Syria, porphyry from Egypt and Hellenic Columns from the Artemis Temple in Ephesus. More than ten thousand people worked for the construction and the third church was inaugurated by the emperor on 27 December 537. The mosaics were finished later on, during the reign of Justin II (565-578).

Several earthquakes happened and gave damaged to Hagia Sophia. The earthquakes on August 553 and December 557 caused cracks in the main dome and the eastern half-dome, and with the earthquake on 7 May 558, the main dome collapsed completely while destroying the ambon, the altar and the ciborium over it. This time it was Isodorus the Younger, the nephew of Isidore of Miletus, who was going to rebuild the dome. He elevated the dome by 6,25 meters, which got its current height today , totally 55,6 meters. With the presidency of the Patriarch Eutcyhius, the cathedral opened again on 23 December 562. It became the seat of the Orthodox patriarch of Constantinople, also imperial ceremonies were held there.

The prophet of God in Muslim religion, Muhammad, had prophesied that the first Muslim to pray in Hagia Sophia would go to paradise. Since then, it was a great ambition for Muslim leaders to get Hagia Sophia.

On 29 May 1453, The Sultan of the Ottoman Empire, Mehmet II, conquered Constantinople after a 54 day siege. He directly went to the ancient Byzantine cathedral of Hagia Sophia. When he saw a man hacking the stones of the church and saying that this was a temple for infidels, Mehmet II ordered the looting to be stopped and the church to be converted into a mosque.

With the following years, Sultans added something to the building. Sultan Bayezid ordered a new minaret changing the previous one of his fathers’. In the 16th century, Suleiman the Magnificent brought two colossal candles from Hungary to be placed on both sides of the mihrab. To the end of the 16th century during the reign of Selim II, famous architect Sinan strengthened the building by adding structural supports to its exterior. He also built two minarets on the western end of the building and the mausoleum of Selim II to the southeast of the building. In 1600s, two mausoleums were added next to Selim II’s: Murad III and Mehmed III.

Two restorations were done in Hagia Sophia at the following years. In 1739, during the reign of Mahmud I, a medrese, a kitchen to distribute poor, and a library, and in 1740 a fountain for ritual ablutions were built.

If any western visitors wanted to visit Hagia Sophia prior to Fossati restoration, they needed a “firman”, a special permit from the sultan which was difficult to obtain. During the restoration, travelers had a chance to see the work. In 1934, the founder of Turkish Republic, Mustafa Kemal Ataturk, ordered the building to be transformed into a museum.

The uncovering of mosaics had already begun in 1931 by the leadership of Thomas Whittemore. This time the white plasters covering the mosaics were pulled out, carpets on the floor were removed and the original marble décor could be seen for the first time in centuries. The museum opened in 1 February 1935

Hagia Sophia was beautifully decorated with mosaics within the centuries during Byzantine period. These mosaics depicted Virgin Mary, Jesus, saints and emperors or empresses. The history of the earliest mosaics is unknown as many of them were destroyed or covered during Iconoclasm. The known ones start from the reestablishment of orthodoxy and reach its height during the reigns of Basil I and Constantine VII.

During the fourth crusade in 1204, Latin Crusaders sacked many Byzantine buildings including Hagia Sophia. Many beautiful mosaics were removed and shipped to Venice. After the Ottoman occupation of Constantinople in 1453, with the transition of Hagia Sophia into mosque, the mosaics were covered whitewashed or plastered. With Fosatti brothers’ restoration in 1847, the mosaics got uncovered and were copied for record. But they still remained covered until 1931 when a restoration and recovery program began under the leadership of Thomas Whittemore.

In 1934, Mustafa Kemal Ataturk ordered that Hagia Sophia would become a museum, the recovery and restoration expanded then. However, many of the great mosaics that Fosatti brothers recorded had disappeared probably with the earthquake in 1894

It is located on the tympanum above the imperial door leading to the narthex. This door was used only by emperors, and it was the most splendid entry to the church. The mosaics date back to 9 or 10th century. Emperor Leo VI with a halo over his head is giving proskynesis, an act of respect – to Christ, who is sitting on a jeweled throne. With his right hand, Christ is blessing the emperor, and his left hand is holding a book written “Peace be with you. I am the light of the world” on it. On both sides of Christ, there are figures in the roundels. One of them is His Mother Mary and the other is Archangel Gabriel. This image is intended to show the timeless power of emperor and his subjects blessed by Christ

The entrance to Hagia Sophia from the south entrance is through a bronze gate to the vestibule with a doorway to the narthex. The mosaic is in the tympanum over the doorway and is dating back to 944. Virgin Mary is sitting on a backless throne decorated with jewels. Child Christ is sitting on her lap and he is holding a scroll. They are both flanked on the left by Justinian I, and on the right by Constantine the Great. Both emperors are in their Byzantine ceremonial dress. Emperor Justinian is offering a model of Hagia Sophia to Virgin Mary, and Emperor Constantine is offering a model of the city, the city that he had made his imperial’s capital giving his name after it. The mosaic presents the connection between the church and the empire and the church as the seat of imperial ritual