A fullday in Istanbul

Istanbul is a historical city and there are lots of spot to visit as Hagia sophia, blue mosque,Topkapi palace,Grand bazaar etc. Joining a tour will make your visit easier then selfvisiting. You will not wait at the entrace ticket que and you will have a guide who know the history of the spots very well

Departure from Pick up from Your Hotel @ 08:30 am
Drop of back to Hotel    @ 17:30 pm
Fullday Istanbul Historical site Tour
A little history of the sights
Hagia Sophia
One of the greatest marvels of architecture, constructed as a basilica in the 6th century by Emperor Justinian. It has been nominated as the 8th wonder of the world by historians.
Blue Mosque, facing Hagia Sophia, famous with its blue Iznik tiles and unique with 6 minarets, built between 1609 and 1616 in the name of Sultan Ahmet 1 by Sedefkar Mehmet Aga, who was one of Sinan’ s apprentices.
The Blue Mosque
Dating from the 17th century, an architectural masterpiece famed for its exquisite blue tiles and six elegant minarets.
Hippodrome
The center of sportive (chariot races, athletics) events and political activities of the old city where held. Egyptian Obelisk, Serpentine Column Constantine Column and German Fountain of Wilhelm II are the monuments decorating Hippodrome.
Grand Covered Bazaar
Most attractive shopping center and biggest "souk" in the world with nearly 4000 shops selling antiques, jewelry, gold, carpets, leatherwear and souvenirs. 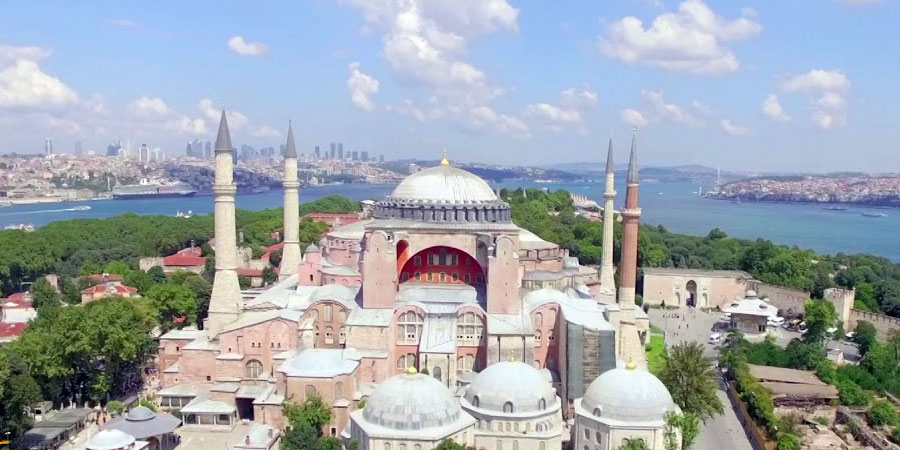 Topkapi Palace
Imperial residence of Ottoman Sultans, the maze of buildings that was the focal point of the Ottoman Empire between the 15th and 19th centruies. In these opulent surroundings the sultans and their court lived and governed. A magnificent wooded garden fills the outer, or first, court. In the second court, on the right, shaded by cyprees and plane trees,stand the palace kitchens, which now serve as galleries exhibiting the imperial collections of crystal, silver and Chinese porcelain. Today the third court holds the Hall of Audience, the Library of Ahmet III, an exhibition of imperial costumes worn by the sultans and their families, the famous jewels of the treasury and a priceless collection of miniatures from medieval manuscripts. In the center of this innermost sanctuary, the Prophet Muhammet (S.A.V) brought to Istanbul when the Ottomans assumed the caliphaten of Islam.
Little Hagia Sophia Mosque
Little Hagia Sophia Mosque is known as one of the oldest standing churches in Istanbul dating back to 6th century. It is early domed – basilica architectural plan of famous Hagia Sophia which was applied here first time in the history. Temple is founded by powerful emperor Justinianos whose reign was golden age of Roman Empire and now is used as a mosque since 1497.

If you stay a night or two in Istanbul, This tour can be combined with this tour with Princess island tour Istanbul, Turkish night show in the club and Bosphorus cruise and asian side Tour

Your browser has cookies disabled. Make sure that your cookies are enabled and try again. Learn More

A soon as we get the request. Our team will inform you by e mail latest in 5 hours time. Please check you e mail in that periot