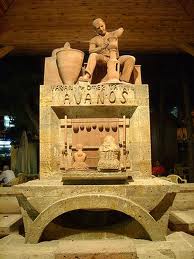 The town of Avanos is set on the banks of the Kizilirmak, the Red River. The town is about 8 kilometers (5 miles) from Goreme. Avanos has a lively center with all the usual amenities including a modern, tourist-oriented hamam (Turkish Bath).
The Kizilirmak (red) river (ancient Halys river) is the longest river in Turkey and it does not only separate the town from other parts of Cappadocia, but also gives the supplies the clay for pottery. It is by this river that the red pottery clay is found from which Avanos derives its main livelihood and its foremost claim to fame. Pottery has been produced in the Avanos area for centuries and some of the techniques still used date back to Hittite times to 2000 BC. The Hittites named the town "Zu Wanes" and it became "Venessa" during the Eastern Roman (Byzantine) Empire.

Avanos is a mass of family run potteries. These famous potters make wonderful souvenirs and are available at a wide range of prices from simple ashtrays and mugs to ornate plates and chess sets.
About 14 kilometers (9 miles) from Avanos is the underground city of Ozkonak and the beautiful 13th century Seljuk caravanserai, Sarihan (where whirling dervishes ceremonies are performed each evening), is only about 3 kilometers (2 miles) from the town center.